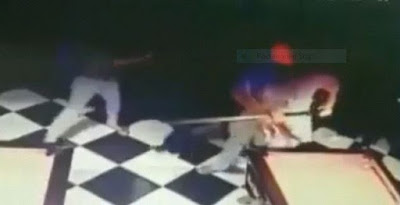 For information purposes only.

It's common in self defence to consider a stick like weapon (hammers, pieces of wood etc)to be used in a slashing/ beating way. They are swung, build momentum and force to injure.

It's worth remembering then that the martial arts mentioned also contain stabbing movements with the stick which are rarely seen to be covered in self defence training. The presumption is that an untrained/ or trained opponent will beat you with the stick and that there will be an arc to try and utilise for defence.

A thrusting and specifically targeted attack - here to the eye - is almost ALWAYS overlooked by many. It'll be covered in knife material where stabbing is of course common but the longer range of a stabbing stick is forgotten or seen as "low percentage".

Here it is the use of a pool cue - the tapered end giving increased pounds per inch to the impact which enters the eye of the victim and possibly the brain - this assault was fatal.

Look at the casual manner in which the attacker walks away - there is no surprise as to what just happened which leads to the suspicion that it was a deliberate stab to the eye rather than a fluke, unintended lashing out. It's not an easy shot at that angle unless it is practiced - another point to consider.

Popular posts from this blog

May 28, 2020
Solo stick fighting drills - part one: one hand Jethro Randolph/ 2020 You will need a Escrima stick (google it!), ax handle or any stick appx 28” /71 cm. If you can't get a rattan stick make your own from PVC pipe, old broomstick etc** Drill 1: Stand in a generic “fighting ready position” , hold your stick in front in your dominant hand, same side foot forward. Practice two diagonal hooking slash strikes with the stick. These are : Forehand diagonal slash from 2 o clock down. Then: Backhand diagonal slash from 10 o clock down. You are now striking a “X” in front of you. Repeat and practice. Use intention don't just go through the motions. Drill 2: Do the same with your Non Dominant hand. Drill 3: Alternate constantly between both hands. Drill 4: Practice with one foot forward, then feet neutral (side by side) , then one foot back. Drill 5: Start to move your feet as in sparring while striking X's with the stick, alternating hands and chang
Post a comment
Read more

November 11, 2020
The past month's workshops have focused on developing mastery of basic, aggressive unarmed skillsets that target the attacker's face – specifically the eyes. Both open and closed hand (fist) tactics have been explored. This extra skillset uses open hands. It is easy to learn, effective with consistant practice and is low risk to apply for a person with little training. The set is ideal as a tactic for women trainees as it doesn't rely on strength alone but rather aggression and inflicting pain and damage. This article is shared for information purposes only as an add on skillset to the work you've already done to play with – experiment for yourselves with adding it to existing ideas or as a stand alone set up. The training dummy has been set to 6 feet to simulate size differential to the trainee who is 5' 4” – never assume equal size or numbers! The context of the confrontation is not covered in this article . A clear attack is assumed for technique purposes o
Post a comment
Read more